‘Because of this many of his disciples turned back and no longer went about with him. So Jesus asked the twelve, “Do you also wish to go away?”’ John 6: 66-67

It seems that Jesus had offended a few of his less committed disciples. It is interesting that the text refers to those who “no longer went about with him” as disciples. Disciples are, by definition, followers. It would have been one thing if the text had said, “Some who heard Jesus were offended and decided not to listen to his crazy talk anymore.” Or if the text had said, “A few people checked Jesus out and weren’t that interested in his message and moved on.” 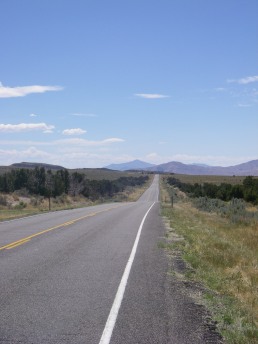 It is one thing to dismiss someone before you really know them. It is another thing to commit to becoming a follower and then back out. Following usually assumes a certain level of commitment, a decision to stick it out even when things get hard or a little weird. There is a difference between a disciple and a fickle follower. This seems to be Jesus’ question to the twelve disciples, “Do you also wish to go away?” It was as if he was asking, “Are you also fickle followers or are you in all the way?”

I remember a very clear moment when I got cold feet and just about backed out of a commitment I had made. I had planned a bicycle pilgrimage through the West that was really just one big, 4,000-mile clockwise circle that started in Portland and ended in Portland. My plan was to visit all the towns and places I had lived as I sorted through the rubble of my emotional life after a divorce. But I also was doing this for the Church. Recognizing that our ecclesiastical life represented a wilderness experience of sorts I had committed to seeing what I could learn about our faith by going out into the wilderness myself.

My trek would take me through Oregon, Idaho, Montana, Wyoming and Colorado—all places I had lived at one point or another. The next destination after Colorado was the Bay Area and, unfortunately, a very imposing and terrifying Nevada desert lay between the Rocky Mountains and the Sierras.

As I neared the desert in Delta, Utah and the thought of 400 miles of 100-degree heat across a barren desert, I began rationalizing, “I don’t really need to cross the desert on my bike. No one will blame me if I just take a Greyhound for this section.” For four days I went back and forth, first rationalizing my way out of the experience and then recommitting myself to the experience as had been my original intention.

In the end I steeled my nerves, calmed my fears and made the necessary preparations to pedal my way across the Nevada desert on a section appropriately signed, “The Loneliest Highway in America.” I was glad I did. It was the toughest part of the whole 10-week trip and the most illuminating, deepening and revealing. I will never forget how I felt both completely alone and completely loved by God all at the same time.

But when the going got tough I almost got cold feet and took a short cut. I almost took the wilderness out of the wilderness experience. I almost made a mockery of discipleship. I almost became a fickle follower of my own commitments.

Following Jesus isn’t for the faint of heart.

And sometimes even committed disciples get cold feet. My advice then is to keep pedaling, keep walking, and keep following. You’ll be glad you did.