(Author note:  Jules is my 30-year old child who came out as lesbian at age 19 and trans androgynous at age 28. They/their/them are preferred pronouns. I share this with their permission.)

This may seem like an odd letter to come from your dad at this time. I have a feeling that I am writing as much as a confessional for me as I am out of care for you. My motivations are not exactly clear, yet I feel that I need to share this with you.

I don’t know if you have been following the news of the General Conference of the United Methodist Church these last few days. In fact, as I say this I sort of smile, as I am aware that following church news is not something that you have done for a long time nor even feel compelled to do. But I do want to catch you up on it and then explain to you why I am writing. 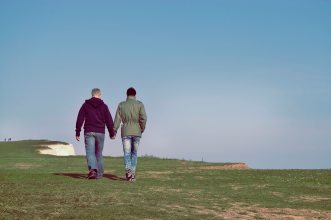 Our Methodist friends were wrestling this past weekend with the same issues we Presbyterians were wrestling with over four years ago in 2014. You know the issue I am talking about—the issue of the inclusion of LGBTQ+ persons in the leadership of our churches and the support of same sex marriages. You might remember from our conversations that we Presbyterians voted to take our prohibitive language out of our Book of Order which made room for churches and their leaders to become more inclusive. Some churches took advantage of the new freedom, some decided to make no changes to their historic stances, and some were so troubled by the “relaxing of standards” that they left the denomination.

I have been in touch with Brandon over these last few weeks, you know my Methodist preacher friend, as he was watching and praying his way through this in his denomination. Of course, you know what he was hoping for—a decision to finally free up his churches to be more inclusive of the LGBTQ+ community. I know Brandon and many of his colleagues and friends were disappointed when the General Conference voted for what was called the Traditional Plan. The title itself doesn’t need much explanation except to say that things didn’t change much. If the LGBTQ+ community didn’t feel very welcome ten years ago they may feel even more unwelcome today.

Of course, a vote by an international body doesn’t mean every individual church feels this way. It just means that the majority felt that way and those who disagreed are now left with how to respond in a way that feels faithful to the gospel of Jesus Christ. I have many Methodist friends who are deeply hurt by this recent vote.

So why am I writing to you? I am writing to you because I feel some conflict between my role as your father and my role as a Presbytery leader who is responsible for the spiritual lives of 96 churches and 14,000 members. You know that if I was just acting as your father I would send a heartfelt, sad, and possibly angry letter to our Methodist friends and tell them that this is personal. This cuts at the very fabric of our family. But as a religious leader I have to be cognizant of the diversity of the people in the pews—some who are ready to march in protest against this decision as well as those who are breathing a sigh of relief and applaud this decision of the Methodist world communion.

You know that I have enough of a counselor’s heart to know that I believe that all growth starts with accepting people where they are, giving them information and then watching the spirit move their hearts and their lives at a pace that is true to how they are psychologically built. I learned long ago when I was a probation officer that I can’t make people change. I can only make sure they have all the information and tools they need, understand the consequences of their actions, and then walk with them as they make their own choices. In the end, if I did that I always felt good about my presence, even if I had hoped for a different outcome for them.

But it still pains me. It pains me that I am choosing to be patient with people while you are carrying pepper spray because of the recent attacks on queer people in Portland. Am I letting you down by not driving around to every church in our presbytery and insisting that enough is enough? Anything short of full inclusion of LGBTQ+ people in our presbytery will not be acceptable, is not a good reflection of Jesus’ life and not okay with this father. Or would I be letting our presbytery down if I came out too strongly on one side or another and delighted some of our churches and offended others splitting our presbytery into two distinct camps?

I cried big ol’ dad tears today when you told me that you have now learned to stay away from certain areas friendly to queers because they have become targets for attacks by the Proud Boys. I cried because within 24 hours of each other the Methodist Church majority just voted to say, “We are not going to make it feel any safer for your kind,” and you just told me that “queer hangouts” are not a safe place for you given the recent movement to target your kind. Is there any safe place for you, my dear one?

Jules, I know that I can’t promise you that I will make the church more inclusive and that it will ever feel safe enough for you to open your beautiful heart to them, to reveal your full-sleeved tattoos, and to share communion with them in a way that you know you are just as much a part of the body of Christ as anyone.

“Take your time,” I will say, “but know that every hour that you wait breaks a father’s heart.”

8 thoughts on “A Letter Reflecting on the Methodist Decision”