I think I just saw our future.

Last week I was attending an eight-week class on the eight major religions of the world. The group is studying Boston University professor, Stephen Prothero’s book God is Not One: The Eight Rival Religions that Run the World—and Why Their Differences Matter. 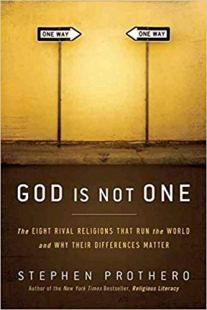 I missed the first week where the facilitators took time for each participant to introduce themselves and share a bit about what brought them to the class. I didn’t have to be there to discover what they shared. At this second class the subject was Prothero’s chapter on Christianity. The facilitator started the class by saying, “I am going to be interested to see how you all react to this class this week as it seemed that just about everyone here was either hurt by the Church or found Christianity wanting.” People chuckled in recognition.

As I listened to the participants I heard the usual stereotypical reasons for rejecting the Church,

Coming from the Christian tradition I actually felt that the class presented a very fair treatment of the subject matter. Prothero seemed to have a pretty objective and fair view of Christianity as he gave a simple overview of everything from Eastern Orthodox to Catholicism to Protestantism to LDS to Pentecostalism, among many others.

I really appreciated the class. There was room for presenting the subject matter and room for individual participants to respond from their own experience. It had the effect of both educating one on the broader Christian tradition and allowing people to share their own experiences with regard to the tradition. But there definitely was a feisty spirit among the group as the subject matter elicited a number of negative reactions.

Then something happened. The facilitator decided to close the class with a short quote by St. Isaac the Syrian, a Christian mystic from the 7th century. He read this:

“Be at peace with your own soul;

Then heaven and earth will be at peace with you;

Eagerly enter into the treasure house that is within you;

And so will you see the things that are in heaven.

For there is one single door to enter both…

The ladder that leads to the kingdom

is hidden within your soul.”

And the room melted. One person said, “That sounds like my spirituality.” Another person spoke up and said, “If that is what it means to be Christian I probably would still be in the Church.”

It’s worth pondering. This just might be our future.

4 thoughts on “Is This the Future?”