Two weeks ago, I decided that I would highlight Earth Day since this post lands on Earth Day itself, April 22. I was just about ready to sit down and type out that post after gathering some data when a NYT article was forwarded to me through Facebook. Within hours numerous other people were saying, “Did you see the NYT article on languishing.”

My fingers got itchy and I had nearly put the finishing touches on the post when the verdict for the Derek Chauvin trial was announced. Suddenly, that became the most important topic for the week. How could a religious leader in a presbytery that is intentionally wrestling with white structural racism not have something to say about this?

All seemed important. Earth Day is one observance that provides a natural connecting point between a faith tradition that believes in a Creator God and a Pacific Northwest culture deeply committed to environmentalism. But, as important as that was, the NYT article on “languishing” spoke most directly to how so many of us are feeling in this time when hope just seems to be teasing us. That is, until the verdict came out and suddenly my attention was yanked another direction.

That is what I want to speak to—this confusing aimlessness and uncertainty about what should get our attention in this in-between time.

At the root of that for me seems to be this need to find some traction somewhere. I recently got approved for a study leave for later this fall (pandemic willing) to walk the Camino in Spain. While it is in my area of study (pilgrimages and mysticism) the real reason I began planning it was just to have something to work toward and to give some structure to my days. I had to find hope somewhere! 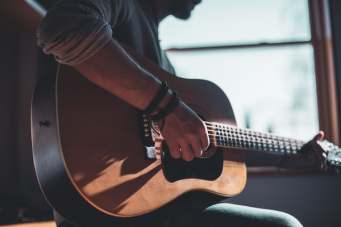 Almost every day I go through this same exercise of setting goals for the week and for the month only to find that carrying them out is like walking through emotional mud. So, I end up doing what seems most necessary for the day. I make sure to practice my yoga, meditate, write in my prayer journal, attend to the most urgent presbytery matters, walk, shop, cook, play guitar and connect with family and friends. With little variation that is pretty much how every day looks.

I have today handled. It’s the future I can’t seem to figure out.

The NYT times article was titled, “There’s a Name for this Blah You are Feeling: It’s Called Languishing.” The author, Adam Grant, writes, ““Languishing is a sense of stagnation and emptiness. It feels as if you’re muddling through your days, looking at your life through a foggy windshield. And it might be the dominant emotion of 2021.”

When I read it, it named not only what I was feeling but what I was hearing from so many others around me. A few weeks ago, I was hearing hope as vaccines were rolling out and people were using projected dates as a way to mark the end of this pandemic nightmare.

The dates didn’t seem to hold as much promise as we had originally thought. There are concerns that we are in a race against time as variants potentially outpace our vaccination schedule. Pandemic fatigue is resulting in more people disregarding safety precautions. The July 4th goal for family get-togethers set by the Biden administration doesn’t have the same hopeful ring to it that it did a few weeks ago.

Whatever it is, many of us are feeling this aimlessness, this inability to get traction, this period of stagnation and languishing. The NYT times article said that the first step in dealing with the feeling of languishing is simply naming it.

Naming it takes some of the power it has to turn into depression. Naming it helps us feel a little less alone as others come out of hiding as well. Naming it quiets that voice that keeps asking, “What’s wrong with me?” Naming it helps us frame it as a temporary feeling due to circumstance rather than a failure of character. Naming it is the first step toward liberating us from it.

Jesus famously said, “You shall know the truth and the truth shall set you free.” We often immediately assume that Jesus is referring to truths about himself or about God or about the right way to live. But I also think the truth can apply to coming to terms with our emotional reality.

Are you languishing too? Are you feeling aimless and stagnant in your pandemic prison? It’s okay. Admit it. You are not alone.